My Hero Academia Wiki
Register
Don't have an account?
Sign In
Advertisement
in: Characters, Females, Deceased,
and 3 more
English

Daddy said all that stuff, but… don’t worry. I’m on your side, Tenko.
Hana to Tenko in "Tenko Shimura: Origin"

Hana Shimura (, Shimura Hana?) was the older sister of Tenko Shimura and the granddaughter of Nana Shimura. She was killed by her brother when his Quirk went out of control.[1][2]

Hana was a young girl with dark, medium-length hair that she wore up in pigtails on the sides of her head, short bangs that hung halfway down her forehead, and two shoulder-length, thick strands of hair left out to frame her face. She had dark, cat-like eyes that slanted inwards and towards the middle of her face. She somewhat resembles her paternal grandmother.

She wore a plain light-colored T-shirt with stripes around the sleeve cuffs and collar. 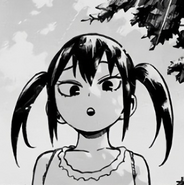 Hana in the manga.

Not much is known about her personality, but she appeared to have a fascination with her grandmother. She seemed to be on friendly terms with Tenko Shimura, her brother. This was seen when she made him promise to be a hero with her and always held his hand.

However, despite her apparent love for her brother, she was shown to be selfish and dishonest at times, cowardly accusing her brother of finding the photo of Nana in their father's office, when she had been the one to show it to him, simply to avoid getting in trouble.

However, she only did this out of fear of punishment from her father, as she knew he'd abuse her like he did her brother. Also, she was very remorseful for selling out her brother and tried to apologize for telling on him.

At some point in the past, she discovered a picture of her grandmother with her father. She later showed the picture to her brother, Tenko. She promised to always support her brother in his dream of being a hero. However, when her father discovered she went in his office, she said it was Tenko out of fear of being abused by him and watched as he took his anger out on her brother.

Later that evening, a guilty Hana tried to apologize to her brother for selling him out and ran to check on him after he started to act strange. However, she reacted in horror at seeing their dead dog and tried to call out to their mother only for Tenko to grab her and accidentally kill her with his newly manifested Quirk. Tenko would then go on to accidentally slaughter the rest of their family, leaving himself as the only surviving member.[2]

The only thing that remained of Hana were her hands that Tenko, now going by Tomura Shigaraki, wears on his villain costume.[1][3] Her lonely brother would go on to be the successor of All For One, the very villain who killed their grandmother.

During Tomura's surgery, the latter is stuck inside his mind and regains his humanity for a little while. A vestige of Hana goes up to her brother and apologizes for having framed him. Tomura smiles, telling his sister that it's fine and that it doesn't matter anymore. Later on, Hana attempts to stop her brother from falling back into All For One's grasp alongside the rest of her family, only to be rejected.[4]