Tomura Shigaraki (Formerly)
All For One

Chapter 220
The Haibori Woods (, Haibori Shinrin?) were a secret hiding place of the Creature Rejection Clan,[1] and later for the League of Villains.[2]

The dense coniferous forest offers a good hiding place due its location deep in the mountains.

The former Hideout of the Creature Rejection Clan before they were raided by the League of Villains. All For One later reuses the mansion in the aftermath of the Paranormal Liberation War, right after breaking out of Tartarus, to act as a hideaway for himself, Tomura Shigaraki, Dabi, Spinner, and Skeptic. He informs Lady Nagant to deliver Izuku Midoriya to the location within two months.

However, aware of Lady Nagant's potential betrayal, the League abandon the mansion for a new hideout, with All For One using it to lure Izuku and the other Top Pro Heroes inside, where he awaits them with a video recording of himself. The mansion is completely wiped out afterwards by a time bomb placed by All For One.[3] 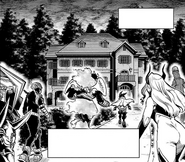 Deku and the Pro Heroes arrive at the mansion.

All For One destroys the mansion.