My Hero Academia Wiki
Register
Don't have an account?
Sign In
Advertisement
in: Characters, Males, Mutants,
and 5 more

Gyges (ギュゲス, Gyugesu?) was one of the guards of Tartarus' main entrance.

Gyges had a lanky appearance and six arms.

The most characteristic element of his costume was his helmet, which completely hid his face, and was decorated with two horns.

Little is known about him but he had a great sense of duty. After being aware of the danger posed by All For One and his Nomu, he called for a code-red. 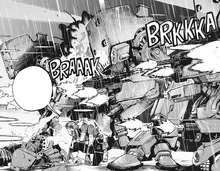 While Gyges and his brother Briareos are guarding the Bronze Gate, the Mainland Gate of Tartarus prison, they are attacked by the All For One controlled Tomura Shigaraki and his Near High-End Nomu. Gyges and his brother use the prison's security robots to repel the attack, but during the first confrontation, Briareos is killed.

When the guards in Tartarus call them for a report of the situation, Gyges reports that his brother is dead from the attack, and he calls for a code red security lockdown. All For One considers the whole situation draining, and uses his Quirk to destroy the section of the bridge that Gyges is on, and then continue his assault on Tartarus.[1]

Unknown Multiple Arm Quirk: Gyges possessed a Quirk that appears to give him six arms, though it is unknown if the extra arms are retractable or a permanent addition to his body.

It is somewhat similar to Mezo Shoji's Dupli-Arms.