Shoto builds up his fire and ice, rushes toward his opponent, hits them with his fist and unleashes a massive wave of cold fire, able to cover a massive section of terrain completely in ice.

This move was first used against Dabi during the Second War. This move's power was enough to completely extinguish Dabi's inferno he made with his Blueflame Quirk, and to knock the villain unconscious.[1] 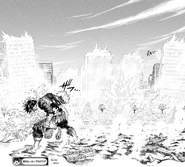