My Hero Academia Wiki
Register
Don't have an account?
Sign In
Advertisement
in: Characters, Villains, Convicts,
and 8 more
English

Brats like you sure know how to pass the blame. It's no good. I don't really hold a grudge against 'em about my eye. I killed 'em, just like I wanted to. And they tried to stop me. We all did our best and had to deal with the results. What's bad is when you can't put your money where your mouth is... like your dear mommy and daddy!
Goto Imasuji to Kota Izumi about his parents in "Stake Your Life, Hero!"

Goto Imasuji (, Imasuji Gōto?),[4] also known as Muscular (マスキュラー, Masukyurā?),[5] later Jailbreaker (ダツゴク, Datsugoku?),[2] is a villain affiliated with the League of Villains as part of its Vanguard Action Squad. He serves as a primary antagonist of the Forest Training Camp Arc.

He was incarcerated in Tartarus,[6] being freed by All For One.[7], until he was once again defeated by Izuku Midoriya and imprisoned.[8]

Goto is a large, bulky, and extremely muscular man set wide with short, spiky, and sandy blond hair with small black eyes. He has a large scar going across the left side of his face, his left eye replaced with a prosthetic one, and he has another, smaller scar on the right side of his forehead. As of his appearance after the Paranormal Liberation War, Goto's hair has grown longer and he has developed stubble all over his chin.

His outfit consists of a black, hooded cloak and a white hockey mask with multiple holes. Underneath this, he wears a red tank top, a dark jacket that hangs around his waist, dark green pants, and black knee-high boots.

Goto in the manga.

Goto in the past, before losing his left eye. 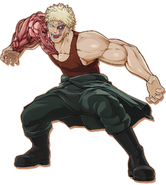 Goto in My Hero One's Justice.

Befitting his appearance, Goto has a very sadistic and bloodthirsty personality. He openly admits that he wants to use his Quirk freely to kill. Goto enjoys killing and tormenting those he fights, often saying "show me your blood!". Unlike most of the other members of the Vanguard Action Squad, he joined the League of Villains just to let loose with his brutal tendencies, rather than following Stain's ideology.

Even so, Goto does have ideals of his own. He believes that people should deliver on whatever promises they make to others or else their words mean nothing. To him, "right" and "wrong" are determined by one's ability to accomplish their intentions. When he fought Water Hose, he viewed it as a battle of wills between his intent to kill and Water Hose's intent to stop him; as he was victorious, he was right and Water Hose was wrong. Conversely, Goto accepts the loss of his left eye as the result of Water Hose's intent and bears them no ill will for it. He even spoke highly of the heroes to their son.

Goto's signature trait is his overconfidence which later proved to be his greatest flaw. Goto believed himself superior to Izuku Midoriya because his Quirk's augmentation powers were more potent than Izuku's. This superiority complex resulted in Goto using only part of his power to toy with Izuku. His overconfidence is also what caused him to become distracted during their fight. Izuku was able to land a powerful smash against him on two separate occasions because he allowed himself to be distracted by Kota Izumi.

Despite his ego, Goto does compliment Izuku's strengths. After getting hit by a full-power smash, Goto admitted Izuku is powerful and decided to stop holding back. However, this never stopped him from taunting Izuku during their bout. He later gains a twisted sense of respect for Izuku, being overly eager to fight him again during their second encounter. He also gets bored easily against enemies that are unable to match him, and inquires if there are any stronger fighters around, as shown during his battle against Grand and the Ketsubutsu Academy High School students.

Unlike other villains, Goto doesn’t seem to have any true end goal in mind, only wishing to kill and rampage until his heart's content. He even tells Izuku that his only wish is to live every day to his fullest and cause all the bloodshed he can muster, so that he can die with no regrets.

Overall Abilities: Goto is a very dangerous villain, being one of the strongest members of the League of Villains' Vanguard Action Squad. His incredible combat aptitude allows him to single-handedly overpower, and potentially kill, his adversaries, most notably, Water Hose. Goto also has a great handle on his Quirk, which he used to exponentially increase his physical might in parts of his body, or his whole body. By infusing his heightened brawn into his melee combat abilities, he overwhelms his opponents with blurring speeds while delivering heavily reinforced strikes, making him a highly formidable force to face in battle. Though red-blooded, Goto does sustain some form of injury after a bout, such as his missing left eye caused by his confrontation with Water Hose. Goto's bloodthirsty nature and battle efficiency earned him the epithet, "The Carnal Murderer".

During the Vanguard Action Squad Invasion, Goto was more than capable of repeatedly overpowering Izuku Midoriya, a One For All inheritor who is one of the most powerful students at U.A. High School. When Izuku delivered a 100% Detroit Smash, which is equal to that strength of All Might, Goto emerged virtually unscathed, albeit at the cost of his tank top and one of his prosthetic left eyes. After the said attack, Goto revealed that he was holding back a great deal of his might, and decided to fight seriously. At full power, Goto not only continued to dominate Izuku, but nearly killed him too, even as the young hero employed another 100% "Detroit Smash", had it not been for the intervention of Kota. Kota's actions inspired Izuku to go beyond 100% of One For All in order to overcome Goto's power and finally defeat the villain. Battling against Izuku indicates that Goto's overall prowess is enough to contend with someone of All Might's caliber.

After being freed from Tartarus by All For One and Tomura Shigaraki, Goto went on a rampage and eventually encountered Grand and Turtle Neck, withstanding the vibrating student's "Tremoring Earth" Super Move, but the villain's attempted carnage was halted by the arrival of Deku. However, unlike their first encounter, Goto was overwhelmed by Deku's new multitude of Quirks and was unable to land a blow on him. As their clash reached its climax, Goto's muscle tendons sporadically unraveled due to Grand's maximum-output vibrations, leading to a weakened Goto being soundly defeated by Deku a second time.

Pump Up (, Kin'niku Zōkyō?)[6]: Goto's Quirk allows him to greatly amplify his own muscle fibers, even reaching a point where they can’t be contained by his skin.[9] These enhanced muscle fibers exponentially increase all of Goto's physical abilities to a superhuman level, roughly on par with One For All.

He has also been shown to use his Quirk for defense by covering his whole body in an armor of augmented muscle fibers, protecting him from blunt force and powerful vibrations. Goto can can cover his body in more than 12,000 layers of muscle.[10] It is later shown that many of his muscle fibers can be depleted of energy if Goto takes too much damage, significantly weakening his body.[4]

Prosthetic Left Eyes: Goto keeps a small collection of replacement eyes in his left pocket in case his regular one is damaged or loosened from its socket. Each one sports a unique design. Goto picks a replacement depending on his current mood.[11]