My Hero Academia Wiki
Register
Don't have an account?
Sign In
Advertisement
in: Characters, Males, Emitters,
and 11 more
English

Gigantomachia (ギガントマキア, Gigantomakia?) is a villain associated with the League of Villains.[3] He is one of All For One's faithful servants and his former bodyguard, later serving his successor, Tomura Shigaraki.

Gigantomachia is an enormous individual, about the height of a large tree with a musclebound build. His brown hair is spiky and parts of his body appear to be jagged, much like rock. His teeth are prominently pointed, his lower canines protruding out of his mouth on either side.

Notably, he always carries a portable radio wherever he goes, sometimes even tying it to a rope and wearing it around his neck. He also sports a hooded cloak that he wears while in public.

Sometime after the Revival Celebration, he has taken to wearing a new set of armor.[4] 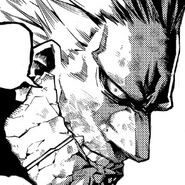 Gigantomachia appears to be a polite person at first, but will quickly become impatient and aggressive towards those that are uncooperative with him. If someone manages to help him out though, he will simply leave and avoid a confrontation.[5]

He is also a faithful servant to All For One and questions Tomura's worthiness as his successor. His devotion and obedience to All For One are so great that simply hearing a recording of All For One's voice can calm him from breaking out into a blind rage.[6]

Daruma Ujiko describes Gigantomachia as a walking calamity who lives and dies for the sake of his master, with the giant himself repeatedly stating that everything he does is for him. Once awoken and commanded, he will plow through and destroy anything and anyone in his path with no regard for anything but his sole objective. As mentioned beforehand, he holds no respect for anyone he deems as weak, as he initially viewed Tomura as someone who could not stand up to All For One's strength in his eyes. However, once he saw Tomura unlocking his true power and emerge victorious over Re-Destro, he truly acknowledged him as a worthy leader, even shedding a tear of joy at him standing proud over his defeated foe.[7]

Overall Abilities: Gigantomachia is an incredibly powerful force, serving as All For One's personal bodyguard for years even before being modified with multiple Quirks. During a brief encounter with Gran Torino and several police officers, the behemoth forced the veteran hero to retreat while leaving a massive cavity in the side of a mountain. Come winter, Gigantomachia was able to take on the combined forces of the League of Villains' six remaining members (Tomura, Dabi, Himiko Toga, Spinner, Twice and Mr. Compress) with ease and defeat them repeatedly. Even after battling him nonstop for a month, half of the League made little progress towards defeating Gigantomachia.[8]

In Tomura's own terms, Gigantomachia possesses "too much HP" which the behemoth villain abuses to exhaust his opponents into submission. Gigantomachia's body is extremely resilient, being able to manage the incredible strain of holding multiple quirks even without having his body modified, being one of the few people in the world capable of this. Come March, Gigantomachia was even able to take on the heroes who went to fight. When going all out, he was able to overpower them and managed to kill a few heroes including Majestic a hero who would have been in the top ten.

Gigantomachia's only known weakness is that he can hardly think for himself. He requires orders from his master in order to carry out a task. The only known task that he can accomplish without being ordered is to come to his master's aid.[14]

According to Kyudai Garaki, Gigantomachia has been modified with several Quirks that allow him to act as the perfect bodyguard.[13] These Quirks include:

Gigantomachia's stats, according to the Ultra Analysis Book

Deutsch Polski
*Disclosure: Some of the links above are affiliate links, meaning, at no additional cost to you, Fandom will earn a commission if you click through and make a purchase. Community content is available under CC-BY-SA unless otherwise noted.
Advertisement