My Hero Academia Wiki
Register
Don't have an account?
Sign In
Advertisement
in: Characters, Females, Transformers,
and 6 more
English

Enigma (エニグマ, Eniguma?) is a Hero and a sidekick of Ingenium.[1]

Enigma has notably straight teeth and quite long, dark hair, which is styled into two low plaits with a neat fringe hanging just over her eyes. Her eyes themselves are oval-shaped, and appear to be entirely blacked-out, showing no visible iris or pupil.

When she activates her Quirk, her appearance changes drastically and seems to be a kind of pitch-black mass with a white mask for face with her facial features and long elastic arms. Under her face there are several white circles arranged in line. Enigma can control the size of her body at will, ranging from only being a few meters taller to being the size of a residential building. 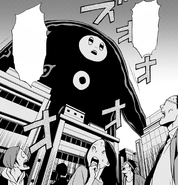 Enigma with her Quirk activated.

Enigma is a calm, friendly and understanding girl, being able to forgive a person who has attacked her because he mistook her for being a villain, acknowledging how she must have frightened them while using her Quirk. She even recognizes that she can be quite frightening when she uses her Quirk. She also gratefully accepts the help offered.

At some point, Enigma obtained her Hero's license and was chosen by Ingenium to be part of Team Idaten. Enigma travels to Tokyo to visit Ingenium's office. Along the way, she gets lost in Naruhata so she uses her Quirk to peer over the city. She is mistaken for a villain and the vigilantes Knuckleduster and The Crawler attack her. She shrinks herself back down but Knuckleduster chases after her and chokes her until she falls unconscious. Pop☆Step finds Enigma's hero license, and Enigma explains that she has an interview with Team Idaten. As an apology, The Crawler offers to carry Enigma to the Hero Office.[2]

She appears again when a cat with a Quirk is forced by Kuin Hachisuka to possess a bus full of people and go out of control. Team Idaten arrives with a truck to rescue them, and Enigma grabs the passengers with her Quirk and puts them in the other vehicle. The actions of the Kuin cause the Cat-Bus to attack the truck, damaging it and leaving it incapacitated to continue the rescue operation when there is still a person in the bus possessed.[3] Fortunately, the hero Ingenium and the vigilante the Crawler manage to rescue this last passenger.[4]

Months later, Tensei is invited to participate in Captain Celebrity's farewell party at Tokyo Sky Egg, and he decides to bring his whole team with him.[5] Enigma participates in Ingenium's acrobatics shows,[6] and then when the building is attacked by villains, she helps Present Mic to keep the spectators calm and do not panic.[7]

Unnamed Mass Expansion Quirk: Enigma's Quirk allows her to increase her body mass, turning herself into a blob-like form in the process. This blob form can grow larger than a residential building and is rubber-like in nature, allowing her to stretch and contract, as well as protect her from attacks. She can also create smaller clones from her giant form and use them as drones.[2]