The Endeavor Agency (エンデバー事務所, Endebā jimusho?)[1] is the Hero Office belonging to the Flame Hero: Endeavor.

Endeavor's Hero Agency is a luxurious skyscraper type building with various floors. The front entrance is decorated with a stylized flaming "E" for Endeavor.

Inside, there is a large office space with several desks and computers. Over 30 sidekicks including Burnin' are constantly dealing with requests and other hero work for Endeavor. The "Flaming Sidekickers" are very passionate and their catchphrase is "Flame On". As the agency of the new No. 1 Hero, the office stays very busy with many of them remaining on standby or going out on patrol. [2]

Endeavor's personal office is a very large room with only a relatively small table and Endeavor's desk inside.[3]

Many of the sidekicks working at the agency have fire and heat type Quirks.[4] 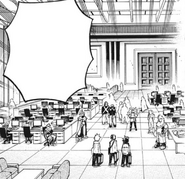 Endeavor Agency in the manga.

For the draft following the U.A. Sports Festival, Shoto accepts his father's offer to do the Hero Agency Internships at his agency because, although he does not forgive him, he recognizes that he is one of the most capable pro heroes and hopes to learn from his experience. Endeavor immediately decides to take Shoto out into the field, and they leave for Hosu City to track down the Hero Killer Stain.[5]

Once they arrive there, the chaos erupts in the city due Tomura releases several Nomu to rampage the city. Endeavor instructs Shoto to follow him into battle, but Shoto receives a message on his cellphone from Izuku with a location on it. He tells his father to go handle the event while he heads to the location, and requests for his father to send him reinforcements.[6] Endeavor encounters other heroes fighting the Nomu and helps them in the fight, sending various heroes to the address that his son had indicated each time a Nomu is defeated. Meanwhile, following Izuku's directions, Shoto finds him and Tenya facing Stain in an alley. Not without great difficulties, the three students manage to defeat and capture the Hero Killer.[7] [8]

Days later, the chief of police Kenji Tsuragamae meets with the recovering Izuku, Shoto, and Tenya at the Hosu General Hospital. He thanks them for capturing Stain, but because they've illegally used their Quirks, to prevent them and their guardians from having troubles with the law, their feat has to be hidden by giving Endeavor all the credit for capturing the killer.[9]

Retrieved from "https://myheroacademia.fandom.com/wiki/Endeavor_Agency?oldid=299288"
*Disclosure: Some of the links above are affiliate links, meaning, at no additional cost to you, Fandom will earn a commission if you click through and make a purchase. Community content is available under CC-BY-SA unless otherwise noted.