My Hero Academia Wiki
Register
Don't have an account?
Sign In
Advertisement
in: Characters from Okinawa, Characters, Males,
and 8 more
English

Less than ten minutes remaining... can you keep this up? I'm looking for... heroes who rise up and break through in the face of adversity.
Ectoplasm to Fumikage Tokoyami and Tsuyu Asui in "Midoriya's Observations"

Ectoplasm (エクトプラズム, Ekutopurazumu?) is a Pro Hero and member of the U.A. High School faculty who teaches mathematics.

Ectoplasm is a tall, slender man with short hair and completely blank eyes tilted inwards. Due to losing his legs in the line of duty, he uses replacement prosthetics, and when in anything but his hero attire, he wears a pair of large glasses.

In his hero costume, he wears a tan cloak that covers most of his body, the area over his torso, and the high collar resembling that of a double-breasted trench coat. Underneath this, he wears a skin-tight black bodysuit with a golden striped neck area and a matching black helmet that covers his entire head, a jaw-guard attached over his nose and around his jaw, and circular mufflers. He also wears baggy dark gray pants and a pair of thin, lightweight prosthetic legs. 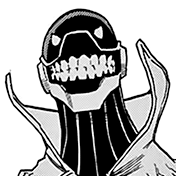 Ectoplasm in the manga.

Ectoplasm is a steadfast and unrelenting hero, which has made him highly popular.[1]

As a teacher, he desires the best from his students and isn't afraid to push them; he openly warned Fumikage Tokoyami and Tsuyu Asui he would do his best to crush them during their final exams. He also told them he was looking for his students to shine under pressure.[2]

Overall Abilities: Ectoplasm is a more than capable Pro-Hero and is among the strongest of the U.A. Faculty members. He excels at close range combat despite not having his legs anymore. Thanks to light combat prosthetics, Ectoplasm's fighting style consists mostly of flurries of fast kicks in close range combat. This is why he was chosen to face Fumikage during the First Term Final Exam's practical portion. His close-range combat abilities exposed Fumikage's weaknesses and Ectoplasm easily overpowered Dark Shadow in combat. Ectoplasm is also very intelligent and has the ability to analyze Quirks in order to help students improve them.

Mathematics Skill: As a high school math teacher, it is implied that he is at least somewhat skilled in the subject of math.

Clones (, Bunshin?): Ectoplasm's Quirk gives him the ability to produce streams of ectoplasm from his mouth and transform it into clones of himself. All clones act as extensions of Ectoplasms real body, similar to a hive mind. He can create as many as thirty clones at once, though, it is possible for him to push his limit to thirty-six on a good day. His clones can be defeated with a strong blow, but otherwise, only Ectoplasm can dispel them.

The clones can also emit ectoplasm to create more clones, however they are still bound by the original Ectoplasm's clone limit. For example, if there are 10 clones, then each one would only be able to make three more at most.

He can also produce a single giant clone of himself powerful enough to easily destroy structures and capture Tokoyami and Asui with a single blow, although this sacrifices his ability to produce normal-sized ones for the time being.[2]

High Density Weights (Final Exams Arc): Ectoplasm and the rest of the teachers use these bracelets to give themselves a handicap while they are fighting their students.

Català Français Italiano Polski
*Disclosure: Some of the links above are affiliate links, meaning, at no additional cost to you, Fandom will earn a commission if you click through and make a purchase. Community content is available under CC-BY-SA unless otherwise noted.
Advertisement