Bwa ha ha! Feeling drunk, are ya?! Hic... like... you... can't... stand up... can't stand up... straiiight?! Same here, man!! Which's why I ain't walking around down there! Better stay away from me, or you'll get just as plastered!!
Deidoro Sakaki to Mirio Togata in "Mirio Togata"

Deidoro Sakaki (, Sakaki Deidoro?) is one of the Eight Bullets who works for the Shie Hassaikai.[1]

Deidoro is a very skinny and bony but muscular man with greasy black long hair, reaching just below his shoulders, circular- and rather deep-set eyes, and notably straight teeth.

Like all members of Shie Hassaikai, Deidoro wears a mask, his one being plain and having drains fitted into the eye-holes so that the alcohol he consumes can drip through. Aside from that, Deidoro wears nothing but a furry vest and dark pants with black shoes. 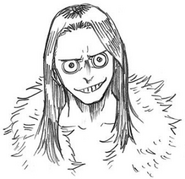 Befitting his Quirk, Deidoro seems to be an alcoholic, as he keeps drinking even while talking or engaging his enemy, letting the alcohol run down his body.

Due to his intoxication, Deidoro has slurred speech and often elongates words in his sentences. He also has some strange habits, like moving around by crawling through the ceiling while upside-down.

Deidoro is rather energetic, but can also get angry easily.

Deidoro is teamed up with Shin Nemoto to stop the heroes from catching Overhaul. During his encounter with Mirio Togata, Deidoro used his Quirk to make Mirio lose his balance. Deidoro then chugs down some alcohol while telling Mirio to stay away from him in order to be safe from his Quirk.

After Shin Nemoto tries to shoot Mirio, failing to do so due to Mirio's Quirk, Deidoro gets angry and asks him if he's drunk. Deidoro then draws some daggers to attack Mirio, however, he and Shin are defeated by Miro's Ultimate Move; Phantom Menace.[1] Deidoro is later arrested along with the rest of the Shie Hassaikai after Overhaul's defeat at the hands of Deku.[2]

Overall Abilities: Being one of the Eight Bullets of the Shie Hassaikai, Deidoro is a very formidable individual.

Sloshed (, Deisui?): Deidoro's Quirk allows him to subject nearby people to severe dizziness and inhibit their sense of balance, putting them in a state similar to being drunk.[1]

Since Deidoro is seen drinking shortly before using his Quirk, the strength of Sloshed may be dependent on how much alcohol Deidoro consumes and has in his system. This may have contributed to his alcoholic nature, although, it's possible that it could be a completely independent variable.

Deidoro's stats, according to the Ultra Analysis Book

Daggers: Deidoro possesses several throwing knives that he holds between his fingers.