To carve my name in history, for future generations! So that going forward, someone out there... will give a moment's thought to the way I lived, and aspire to it. And this dream is no longer mine alone. Today marks my first step towards true infamy. My dream would be trifling indeed if your words could move me to abandon my course! As you are a U.A. student... I assume you can comprehend... my penchant to dream.
Danjuro Tobita explaining his goals to Izuku Midoriya in "School Festival Start!!"

Danjuro Tobita (, Tobita Danjūrō?),[3] also known as Gentle Criminal (ジェントル・クリミナル, Jentoru Kuriminaru?),[1] is an independent villain and an Internet celebrity. He is the primary antagonist of the U.A. School Festival Arc.

Danjuro is a man with a refined appearance. He has a slicked-back hairdo with a curl at the front and sports a handlebar mustache along with a well-kept, medium-sized beard. Similar to La Brava, he has thick black lines around his eyes resembling eyeliner which he applied himself with a marker.

Danjuro's clothes are also quite extravagant, featuring a dark purple jacket with enlarged collars and coattails, a pair of loose, pinstriped pants, and two belts. He also wears a pair of cuffs, and purple gloves along with a woolly scarf of the same color. He is seen using a cane to walk.

As a student, Danjuro was a young man who had his hair rather shorter than it is now, lacking his mustache and beard. He also wore his high school's uniform; a black school jacket with matching pants, and a white long-sleeved dress shirt underneath along with a royal red ribbon tie.

As a young adult, during his time as a freeter, Danjuro's hair had grown longer and he had a short mustache growing along with a beard. He also wore a mucky white dress shirt with dark suspenders. 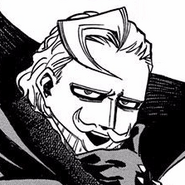 22-year-old Danjuro as a part-timer.

Befitting his alias, Danjuro is a polite and well-mannered person, even while committing villainous acts. He manipulates the way he wants his crimes to play out and is not afraid of facing multiple heroes, showing an unusual amount of calmness and confidence. His mannerisms may also seem slightly over-the-top and eccentric. One of his more common theatrics is to pour coffee or tea into a cup while holding the kettle way over his head and spilling it everywhere.

Although he means well and lacks hostility, Danjuro is shown to lack insight behind his decisions and actions. This was first demonstrated when he hindered a Pro Hero saving someone despite having good intentions. Other cases are how his videos cause more discomfort instead of the inspiration he desires, not understanding the consequences he would've truly brought to U.A. High School by sneaking into their Culture Festival, and how he was unable to stop speaking to Izuku Midoriya when they first met, which accidentally exposed his identity. This also demonstrates his incapability to voice a sound argument behind his intentions like his conversation with his life counselor in high school, his failed attempt to persuade Izuku to let him sneak into the Culture Festival, and how he was unable to fool Hound Dog when he turned himself over to protect La Brava.

Danjuro has little to no interest in money or objects of value. Instead, he chases after fame and reputation, which he tries to achieve through video recordings of his criminal acts. He claims that his ultimate goal is to write his name in history and inspire others who view his actions, and is obsessed with achieving it, as he fears to fade into obscurity after his death. He is admittedly very selfish and claims to not being afraid of trampling on the dreams of others as long as it furthers his own; however, he does have a soft spot for his fan and crime partner La Brava and is capable of being self-sacrificing for her sake. Even more, upon finally being arrested, it was shown that deep down he still desired to be a hero, weeping with joy to hear someone say he could still turn his life around to reach his original goal.

Overall Abilities: In spite of his well-defined appearance and polite nature, Danjuro is a very capable fighter, with an excellent handle on his creative Quirk, Elasticity. Danjuro often disguises the use of his Quirk through his usual flamboyant movements, which may catch opponents by surprise.[4] As he needs to only touch an object to make it elastic (including air, which is invisible), others often don't notice. Danjuro can also apply the elasticity to the clothes he wears, preventing anyone from pulling his cape to knock him off balance.[5] Elasticity is mostly used by Danjuro to escape crime scenes in which he was involved, either by bouncing away, or briskly dealing with those trying to subdue him. Generally, when in engaged in combat, Danjuro never aims to severely injure or kill his opponents, and thus never fights at his full capacity. In addition, with La Brava by his side, Danjuro can be empowered by her Love, making him stronger than he normally is, but the duo only uses this tactic as a last resort. Danjuro's overall abilities, along with his partnership with La Brava, have allowed him to pull off multiple capers and successfully elude capture from the authorities for a full 6 years.

When he and La Brava unexpectedly encountered Izuku Midoriya, one of the strongest students at U.A. High School, Danjuro started off by repelling the One For All inheritor twice, and attempted to make his escape with La Brava both times. He was taken by surprise when Izuku attacked him with "Delaware Smash Air Force", before being overtaken by the young student into a construction site. Danjuro used his Quirk handling to confuse and evade Izuku until he was able to hinder the latter with an elasticized steel beam and make another getaway. Once Izuku caught up to him, Danjuro created elastic shields for protection, but was blindsided when Izuku used the present air membranes against him, leaving him and La Brava pinned down by the glove-wearing hero.

While subdued however, La Brava used her Love Quirk on Danjuro, allowing him to enter "Lover Mode", enhancing the elasticity infuser with enough power to equal and nearly overwhelm Izuku, despite the latter going all out and using the extent of his abilities. Alas, Danjuro was eventually thrown off-balance by one of Izuku's 4 "Delaware Smash Air Force" attacks, before being defeated by the latter's "St. Louis Smash". After the battle, Izuku admitted that out of all the opponents he has fought, Danjuro was the most difficult. This is due to the fact that Izuku empathized with Danjuro throughout their battle. In spite of the defeat, Danjuro used the last of his strength in "Lover Mode" to hurl Izuku off of him a good distance away, but surrendered once the patrolling Hound Dog and Ectoplasm arrived on the scene.

Keen Intellect: Danjuro is very crafty and calculating individual who is very organized when plotting the best course of action. He only seeks to make himself renown to the world, by becoming notorious through crimes he orchestrates, and has videotaped by La Brava. When engaging in his formulated endeavors, Danjuro never aims to inflict serious harm, and once he feels that he made his name and appearance sufficiently known, he abandons the crime scene, intentionally leaving behind any potential fruits of labor most criminals would seek. He was able to develop a effective plan to break infiltrate U.A. High School, knowing both, that the prestigious academic institute has become notorious for being the target of villain attacks, and the annual U.A. School Festival would be the opportune time to mount his incursion, despite the heavy security measures recently implemented to prevent villain assaults.

Danjuro plotted out a complex yet, well-thought out route to U.A. High School, and chose not to use his Quirk to venture to the school, knowing that there are Pro Heroes that patrol the skies. He decided that early morning is the appropriate time to commence his caper, took into account the areas that have the least amount of hero agencies and traffic, and calculated that it would take 60-65 minutes maximum to arrive at the school. In his plan, Danjuro even included a side jaunt involving him and La Brava to visiting a café, while still having enough time to resume the mission. Danjuro was also cognizant that, upon their arrival to U.A., Hound Dog would be on patrol, so Danjuro and La Brava would have to coat themselves in dirt and leaves to mask their scents in order to throw off the canine hero. And since the academia's U.A. Barrier is sensor-based, La Brava can hack into the school's internal network and discreetly disable the sensors. Unfortunately, all of Danjuro's scheming to pervade the U.A. School Festival was all for naught due to a chance run-in with Izuku. During their tension-filled exchange, Danjuro realized that Izuku was a U.A. student. After being reminded of Izuku's prowess from the U.A. Sports Festival, Danjuro, showcasing overall good judgment, opted a hasty retreat, trying to resume his initial machinations before the green-haired boy could contact reinforcements.

When the battle was taken to the construction site, Danjuro elasticized a steel beam from which he removed bolts, and made it appear as if he were going to let the beam give way and crush a nearby civilian. In hindsight, Danjuro intended to rebound the collapsed beam at the last second in order to slow Izuku down, but he didn't have to since a Izuku caught the steel beam instead. Once he was defeated by Izuku, and realized that there would soon be patrolling heroes on the scene, Danjuro had to frame his surrender for trespassing on U.A. High School, all to make it seem the battle with Izuku never transpired. To further cement his defeatism, Danjuro claimed he brainwashed La Brava into working for him so she wouldn't be seen as a willing accomplice.

Elasticity (, Erasutishiti?): Danjuro's Quirk allows him to bestow the property of elasticity to anything he touches, making it stretchable, bendable, and bouncy. This Quirk can affect anything, from the ground to the air itself. Danjuro cannot cancel the effects himself, instead, the effect wears off on its own after time has passed.

By making the air elastic, it becomes a circular invisible membrane that floats in midair, which he can use as trampolines to get around quickly, as shields to deflect his opponent's range attacks such as Izuku's Delaware Smash Air Force, or move them around the environment to his advantage.

Danjuro's stats, according to the Ultra Analysis Book

Knife: Danjuro wields an elaborate knife that he uses for robberies and other villainous acts.[1]