My Hero Academia Wiki
Register
Don't have an account?
Sign In
Advertisement
in: Characters, Males, Heroes,
and 6 more
English

I feel you, Ryukyu! That pain in your heart! Like you're just not good enough!! We need to stand tall and fight on!! We can do it, Ryukyu!! I believe in us!!
Crust in "Wing Hero: Hawks"

Black with a white streak down the middle

Shield Hero: Crust (シールドヒーロー クラスト, Shīrudo Hīrō Kurasuto?) was the No. 6 Pro Hero.[1] He died during the Paranormal Liberation War.[2]

Crust was a well-built man with black hair combed backward, with a streak of grayish-white hair running down from the center of his hairline. The back of his right hand had a layer of crust, probably due to his Quirk.

His hero costume consisted of a black mask over his eyes, and attire similar to the armor Spartans would wear, including a green hooded cape and a black shirt that appears to be stitched down the middle with a red pattern.[1] 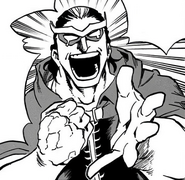 Crust in the manga.

Crust was a very emotional man, crying out of sorrow for All Might's retirement and crying in regret for not being involved in the Kamino Incident.[3] He was also very noble, sacrificing himself in order to save Eraser Head from Tomura Shigaraki's Decay at the cost of his own life, flashing an encouraging thumbs up and grin as he disintegrated, showing that he didn't regret his decision.[2]

Overall Abilities: Crust was a highly capable hero who earned his spot in the top ten heroes in all of Japan. Deserving of his No. 6 ranking, Crust was a talented fighter who specialized in using his Quirk on a team with others. He had enough strength and fighting capability to take on several Nomu, including four High-Ends. Thanks to Crust's proficiency in team battles, he was able to act as the center of the Hospital Raid Team's efforts against the High-Ends.

Shield (, Shīrudo?): Crust's Quirk allowed him to grow stone-like hexagon-shaped shields from his body.[4] He used these shields to protect himself and others.[5] He could expand these shields to a large size and in different directions. The edges of the shields could also cut through obstacles as an offensive attack, and pieces of it can be detached and thrown for the same purpose.[6]

Español Français Polski
*Disclosure: Some of the links above are affiliate links, meaning, at no additional cost to you, Fandom will earn a commission if you click through and make a purchase. Community content is available under CC-BY-SA unless otherwise noted.
Advertisement