View source
watch 02:07
Spider-Man: No Way Home Trailer Dropped - The Loop
Do you like this video?
Play Sound

Just like with his Explosive Speed, Katsuki positions his hands backwards, using explosions to quickly propel him forward, only this time, he condenses them to become stronger and faster, resulting in a flurry of bursts that blast him forward at incredible speeds. He describes the attack as being one he can do when he feels he's in a sensation of total crisis.[1]

He first inadvertently used this technique during the Paranormal Liberation War to save Deku from Tomura Shigaraki/All For One's Rivet Stab attack,[2] and then later to arrive and assist the remaining heroes to attack the Near High-End Nomu.[1] He also uses the ability, in combination with the rest of his classmates efforts, in their plan to capture a rogue Izuku.[3] 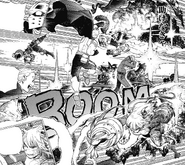