Claustro is a wearable suit of armor designed for the Grand Commander of the Meta Liberation Army, Re-Destro. With the use of this support gear, Re-Destro is able to amplify his Stress Meta Ability to at least 150%.

The armor itself is made from mechanized drones that are kept underground. When called upon, the drones surface and connect to Re-Destro's giant, amplified body to create the suit.[1]

The separate pieces of the armor can be dispersed on command and used to fly through the air. The Claustro armor was destroyed in Re-Destro's battle with Tomura Shigaraki. 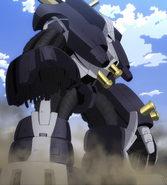