As noted by All Might, although the opposite Hero Course class, Class 1-A, has had the chance to hone their skills in actual combat due to them getting mixed up in multiple Villain attacks, data shows that Class 1-B has actually grown more since the beginning of the school year, as they've stayed out of trouble and thus have been able to quietly dedicate themselves to bringing out their potential.[1] This is also evidenced at an earlier stage, as only one of Class 1-B's students failed the First Term Final Exam versus Class 1-A's five, and, during the Provisional Hero License Exam, all of 1-B's students passed whereas two of 1-A's failed.

Class 1-B does appear to be slightly behind in terms of head-on combat, strategic ability, and quick thinking. However, likely due to their experience with the aforementioned villain attacks, many more students from Class 1-A progressed to the final rounds of their first U.A. Sports Festival than 1-B, and Class 1-A took the Joint Training Battle 3-1 with one draw.

The majority of Class 1-B's students share a friendly rivalry with their parallel class, Class 1-A. However, certain students (most prominently Neito Monoma) take their rivalry to extremes out of jealousy of Class 1-A's popularity and strength and thus desire to topple them.[2] The interactions between the students of Class 1-A and Class 1-B have been few due to the rivalry between the two classes. While Class 1-B treats Class 1-A as rivals (the latter appears to not return the rivalry), the two hero classes are on neutral terms with one another. There are a few in the class who do not outwardly bear ill will towards Class 1-A and are even friendly towards them, such as Itsuka Kendo, Tetsutetsu Tetsutetsu, and Nirengeki Shoda.

Ultimately, the two classes are able to put their differences aside when necessary, (with the exception of Neito, who seems obsessed with the rivalry beyond reason) as shown during the attack by the League of Villains on the mountain training camp when some the members of Class 1-B readily accepted help from Class 1-A's Momo Yaoyorozu, receiving gas masks to protect them from Mustard's Quirk, and Yosetsu Awase later risking his life to protect Momo from a Nomu. They also had a major team-up during the Paranormal Liberation War as a high number of students from each class attempted to sedate Gigantomachia, with jar glasses made by Momo, in order to stop him from making his way to Jaku City. Unfortunately they fail to stop him, but their efforts do manage to get a jar in his mouth, which eventually kicks in and puts Gigantomachia to sleep once he's made it to the city.

Class 1-B and Hitoshi reflect on the Sports Festival. 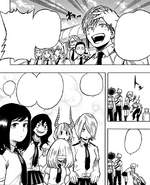 Class 1-B ready for the school trip.

Class 1-B dreads the idea of training.

Class 1-B prepares for Quirk training.

Neito reveals that all of Class 1-B passed the Provisional License Exam.

Class 1-B preparing for the School Festival.

Class 1-B as they appear in Season 5's first opening.

Ranked from tallest to shortest

Ranked by oldest to youngest

Deutsch Italiano Polski Русский
*Disclosure: Some of the links above are affiliate links, meaning, at no additional cost to you, Fandom will earn a commission if you click through and make a purchase. Community content is available under CC-BY-SA unless otherwise noted.
Advertisement