My Hero Academia Wiki
Register
Don't have an account?
Sign In
Advertisement
in: Characters, Females, Emitters,
and 6 more
English

Are you not keen on being interviewed, Himiko Toga? I'm afraid that's too bad. I haven't backed down from a good story ever since my first year in this biz. So I hope you understand, Himiko Toga, that I will strip you bare.
Chitose Kizuki to Himiko Toga in "Interview with a Vampire"

Chitose Kizuki (, Kizuki Chitose?)[1] also known by the code name Curious (キュリオス, Kyuriosu?), was the executive director of Shoowaysha Publishing who was also secretly a leading member of the modern Meta Liberation Army. She is one of the main antagonists of the Meta Liberation Army Arc.

Chitose was a woman with long, pale lilac hair, worn parted to her right side, full lips and pale blue skin. Her eyes were unusual, in that her sclera was completely black whereas her eye irises were green, and her pupils were completely black. And they were framed by notably long eyelashes, wrinkles, and small eyebrows.

She wore gold earrings, a navy blue, shoulderless dress with long sleeves and an X-shaped belt with a circular buckle around her waist. For the Revival Party, Chitose also donned an unbuttoned, salmon-colored jacket with black fur around the collar and hem. She sported light colored laced high boots.

Chitose in the manga. 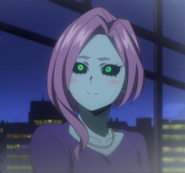 As described by her Liberation Army code name, Chitose was an immensely curious woman who is highly invested in her journalistic pursuits. Due to taking Rikiya Yotsubashi's advice to heart, she believed that stories based on face-to-face interviews were the best way to influence readers, treating even battles as an opportunity to ask questions about one's personality and motivations. As a publisher executive director, Chitose claimed to have never given up on getting a good story ever since her early days in the journalism industry, fondly looking back on them occasionally.

Chitose had been inspired to claim the hearts of the people with her stories, all for the sake of the Meta Liberation Army.[2] Despite this, she was very callous about the lives of her soldiers, utilizing her Quirk to turn them into walking bombs as a battle strategy and describing it as a selfless act from their part.

Despite being uninterested in the League of Villains, Chitose greatly desired to learn about Himiko Toga, having shown an obsessive interest in the circumstances behind her descent into madness. Chitose knew many details about Himiko's life prior to becoming a criminal and had wished to create an article that brought her background as a villain to light.

Due to her immense curiosity and overzealous/obsessive nature, Chitose’s mentality even caused her to outright lose her sense of danger, as seen when despite being in the battlefield against Himiko Toga and nearly being stabbed and cut by her knife attacks, Chitose was not at all alarmed or even afraid for her life and simply continued to excitedly interview Himiko. Even when she was falling to her death upon being affected by Zero Gravity, instead of feeling fear or trying to save her life, Chitose instead ecstatically proclaimed on how interesting her article on Himiko was going to be and excitedly laughed on how wonderful her lines were for her latest work and being completely oblivious to her fall and her impending death.

At some point she met Rikiya and joined the Meta Liberation Army. During a meeting with him, he read an article that she wrote and told him that writing articles based on rumors would not interest readers, advising her to interview her subjects, as an article to guide public opinion must contain human heart.[2]

Chitose is present alongside the other leaders of the Meta Liberation Army during a meeting where Re-Destro declares their intention to destroy the League of Villains. During the meeting, she brings up how Detnerat had recently entered the Hero Industry.[3]

At the start of the Revival Celebration, Chitose confronts Himiko, recognizing her for the string of bloodletting murders she's connected to. Chitose suggests a headline about the high schooler's fall into madness, but Himiko angrily rejects it.[4]

Chitose proceeds to battle Himiko, attacking her in-mass with her comrades in order to corner her, all the while "interviewing" her on her reasons for becoming a villain and she proceeded on shedding light on Himiko's past prior to joining the League and expressing extreme interest and curiosity regarding her reasons for abandoning her normal life, where and how she obtained her survival and combat skills and the reasons for Himiko's descent into madness, even going as far as using her own subordinates as human bombs in order to further corner Himiko and prevent her from transforming by detonating their ingested blood inside her body in order for their "interview" to go unhindered.

As Himiko attempts to escape, Chitose continues to goad her, promising to go public with the tragic story of Himiko's downfall in order to demonstrate the righteousness of the Army's objective. When Himiko transforms into Ochaco Uraraka, Chitose dismisses it as her final attempt to "look cute" before her death but is caught off guard when Himiko activates Zero Gravity to levitate her into the air alongside her soldiers. Bewildered, Chitose assumes that Himiko's fear of death has allowed her Quirk to spontaneously evolve in power.

When Himiko replies that she’s wrong and that Himiko only wants to "love" even more, Chitose begins saying that this would be her best headline ever before Himiko deactivates Zero Gravity, sending Chitose and her henchmen plummeting bloodily into the ground.[5] Her death was later reported to the rest of her comrades who all mourned her.[6]

After her death and defeat of the Meta Liberation Army, Chitose's death was then covered up by the newly formed Paranormal Liberation Front by her comrades and her "accidental" demise was notably published to the public via mass media to hide the incident of Meta Liberation Army's battle against the League of Villains.

She was a valued member of the Army and they were distraught at her death, with Re-Destro shedding tears at her demise.[6]

Chitose admits she's intrigued by Himiko's backstory. She is downright obsessive with the idea of interviewing her, even in the middle of a deadly battle between the two; and she's quite amazed to watch her get more and more deranged as their fight goes on.

Chitose wants to know how and why a nice girl like Himiko became a serial killer and says she has already interviewed her parents and her former high school friends. Chitose wants to use her influence to turn Himiko into a martyr that was shunned and repressed by the hero society, which led to her becoming a villain, furthering the agenda of the Meta Liberation Army.[2]

She nearly kills Himiko by overwhelming her with numbers and hitting her with her Quirk repeatedly but is caught off guard when Himiko transforms into Ochaco and uses Zero Gravity to levitate her into the air and drop her from a lethal height. Even so, all she can think about is how amazing the article about Himiko she'll write is going to be, smiling in pure euphoria while falling and being completely oblivious to her impending death.[5]

Overall Abilities: Chitose was a capable fighter and an excellent team leader in battle. She preferred to have her followers do most of the fighting for her in order to draw her opponents into traps laid down by her Quirk. To compensate for her close range weakness, she wielded a transformable chainring manufactured by Detnerat.

News Publication Executive: Chitose was the Executive Director of Shoowaysha Publishing, meaning she had a strong influence over the news updates distributed to the public.

Leadership Skill: Chitose was one of the Top Commanders of the new Meta Liberation Army, a military force that consists of over 100,000 members.

Landmine (, Jirai?): Chitose's Meta Ability allowed her to bestow explosive properties on anything she touched, be it an object or a living being. A single landmine was not strong enough to be lethal, but she was capable of creating numerous landmines to make up for this weakness.[2]

Chitose's stats, according to the Ultra Analysis Book

Curious Flattener (キュリオスパンク, Kyuriosu Panku?, lit. "Curious Puncture"): Manufactured by Detnerat Co., Chitose's chain ring appears as an ordinary bracelet until activated, at which point it rapidly transforms into a thick, brick-shaped gauntlet with four wedged protrusions on the front.