My Hero Academia Wiki
Register
Don't have an account?
Sign In
Advertisement
in: Characters, Males, Villains,
and 4 more
English

Chikara Yotsubashi (ツ, Yotsubashi Chikara?),[2] also known as Destro (デストロ, Desutoro?), was an infamous villain and the grand commander and founder of the original Meta Liberation Army.[3] He is the son of the Mother of Quirks and the ancestor of Rikiya Yotsubashi.

When he was alive, Chikara had long, light brown hair worn in a simple ponytail. Around his eyes, there appears to be a strange black blotch that apparently functions as some sort of mask.

He wore what appears to be a military uniform with a dark green jacket that had a red-outlined patch on the right sleeve with a figure resembling a rat. Underneath he wore a gray shirt with a red ascot tie. 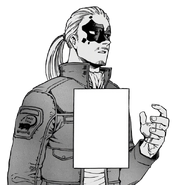 Chikara in the manga.

Chikara was born to an unnamed mother. As he grew up, he was treated with disdain by his peers because of his Quirk, which left his mother distraught at being rejected. At some point, his mother was murdered because of her support of her son's uniqueness and her death became a stepping stone for his future.[1]

With the proliferation of Quirks, the government began to regulate their use. Chikara was against this control system, believing that free use of Quirks is a basic human right. To fight for that ideal, he founded the Meta Liberation Army and adopted the name Destro, promising to be the man who would "destroy the Status Quo".

He and his organization spent years opposing the country that advanced in establishing superhuman laws. At the end of his campaign, he was defeated, the Meta Liberation Army disbanded, and the majority of the members captured. During the years in which he was in prison, he wrote a biographical book exposing his ideals. After completing his writing, Chikara committed suicide. Unknown to the world, he had produced a son. Rikiya would be born from his son's lineage.[2]

Even years after his death, his book continues to be published, and with the retirement of All Might, it is inspiring a new generation of villains who follow his ideals of Quirk liberation.[4]

He was mentioned by Gentle Criminal, alongside the likes of All For One and Oji Harima as some of the world's most infamous villain figures who left their everlasting mark on society.[3]

Destro's descendant was raised by his army's surviving acolytes, who hid his origins from the rest of the world and grooming since childhood to bear the mantle of Destro, restoring the Meta Liberation Army once more. Rikiya amassed an army of thousands and took up the codename Re-Destro to honor his ancestor's memory.[5]

Overall Abilities: Chikara's abilities are largely unknown, however, he has been compared to the extremely powerful All For One.

Leadership Skills: Chikara was the supreme commander of the Meta Liberation Army which opposed a number of nations for several years until its ultimate defeat.

Unnamed Quirk: Chikara's type of Quirk and its abilities are unknown. It is possibly similar to Rikiya's, which allows him to turn frustration into raw power.