My Hero Academia Wiki
Register
Don't have an account?
Sign In
Advertisement
in: Characters, Females, Emitters,
and 6 more

View source
watch 02:07
Spider-Man: No Way Home Trailer Dropped - The Loop
Do you like this video?
Play Sound

I'll never forget the sight of those two hair tufts! He was my role model from that day forward!! As a show of my own even greater dedication to peace, I went for... eight tufts!
Cathleen Bate on All Might in "Me and Myself"

Cathleen Bate (キャスリーン・ベイト, Kyasurīn Beito?),[2] also known as Star and Stripe (スターアンドストライプ, Sutā Ando Sutoraipu?), was the No. 1 Pro Hero of the United States of America.[3]

Cathleen Bate was a tall woman with a well-muscled build. She had elegant facial features, narrow eyes, and long flowing blonde hair with eight distinct tufts swept backward and fashioned in a similar manner to the ones All Might possessed in his empowered form.

Her hero costume was a high-collared skin-tight bodysuit with shoulder pads, boots and gauntlets. Fitting to her home country and hero name, the upper torso was decorated in stripes, and her gauntlets and collar are studded with metal stars. Completing the outfit was a long, striped cape that resembles of the U.S. flag.

As a young girl, Cathleen had long brown hair, suggesting that she either dyes her hair or it changed as a result of her Quirk. She also wore glasses.

Young Cathleen with her little sister. 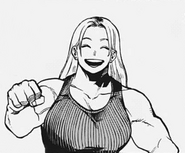 Cathleen out of costume.

Cathleen was very brash, choosing to immediately head out to Japan to aid the fight against All For One despite the United Nations not finalizing a decision on international hero aid.[3]

She also appeared to be somewhat ignorant on villains outside her jurisdiction. Not knowing if the villain appearing before her was All For One or not.[4]

She had a profound admiration for All Might, due to him saving her and her family years ago when he was studying abroad. She considered his two hair tufts to be a symbol of heroism and had her own hair styled in a similar manner with eight tufts, to symbolize her dedication of being a hero. Cathleen also admired his incredible strength, to the point where she always applied super strength to herself using her Quirk.

Cathleen was also shown to have an intense desire to protect others and seek justice, to the point where she was willing to ruin her own reputation and career for the sake of others. This was best seen when she all but demands the use of the Tiamat missiles to destroy Tomura Shigaraki despite the potential international fall out it could cause. Even when told she'd lose her hero license, she didn't care as she could see how much of a threat Tomura was and that it's worth the risk.

From her desire to protect and admiration for All Might, Cathleen was extremely kind and selfless, willing to risk her life to save Japan from Tomura and All For One, going by far as to use the last of their strength to use her Quirk to destroy "Tomura" from within. However, Cathleen was shown to disregard the rules, making her reckless with Agpar adding that her defiance for the rules is what made their nation shine the brightest.

She appeared friendly and sisterly, since she referred to the squadron she worked with as "brothers" and "bros." Since the pilots in the squadron referred to her by the nickname "Star," we can assume they reciprocate that closeness.

Overall Abilities: Cathleen was the No. 1 Hero in the United States, and regarded by All For One as "The strongest woman around." He also noted that she could easily shrug off cheap tricks and petty tactics. All For One even admitted that he'd planned to steal One For All before confronting Cathleen, demonstrating how much of a threat All For One acknowledged her as. Even more, her might was shown able to compete single-handedly against Tomura, while at 98% full power of wielding All For One. Notably, she was able to fly across the Pacific to Japan while standing on top of the plane she was riding, showing she had exceptional balance and endurance.[3][4]

Enhanced Durability: Even without New Order's protection, Cathleen still possessed impressive durability. She was able to withstand the explosion of the Tiamat missiles from a distance without her strength enhancement rule.

New Order (, Nyūōdā?): Cathleen's Quirk allowed her to set a rule onto her surroundings, allowing her to manipulate and bestow new properties onto herself and the world around her. In order to activate her Quirk, she had to first make physical contact with the target and speak its name, then explain the rule she wished to impose. She could only impose two rules at any given time.[5]

She could give herself additional abilities, as well as manipulate the condition of her opponent's body. While there seemed to be no limit to how much she was able to impede someone, even to the point of killing them, there was a limit on how much she could increase ones power, so she could not give herself infinite strength.[1]

She could even use her power on incorporeal things, like the air and laser beams, which she was able to shape into constructs, even very powerful gigantic ones. However she could not arbitrarily effect a target she hadn't touched through clever wording; for example, after touching the air, she wasn't able to make it so that a person who touches the air around them will die.

In order for her Quirk to function, the target must acknowledge itself as the name that Cathleen identified them as; if a living target was in a state of identity crisis, then the Quirk would not effect them. Alternatively, in the case of an inanimate object, which had no sense of identity, then Cathleen's one-sided perception of the target was enough.

Fighter Squadron: Cathleen had a number of X-66 fighter jets at her disposal which are piloted by her close allies. The jets are able to record data during mid-air battles and analyze bio-signatures and Quirks.[9]

Tiamat (ティアマト, Tiamato?): Cathleen had been given special authority that allowed her to call on a series of state-of-the-art hypersonic intercontinental cruise missiles from the U.S. military.[1]