My Hero Academia Wiki
Register
Don't have an account?
Sign In
Advertisement
in: Villains, Next-Level Villains, Villain Factory,
and 5 more

View source
watch 01:54
Obi-Wan Finale - The Loop
Do you like this video?
Play Sound

The Bombers (, Bomā?)[1] were a group of bat-winged Next-Level Villains created by the Villain Factory to act as suicide bombs in My Hero Academia: Vigilantes. They act as the main antagonists in the Sky Egg Arc.

In general, all the Bombers have the same standard look: a round winged entity with a serpentine head that has no facial features except a wide and weirdly lipped mouth. On their backs emerge two bat wings, and they have prominent bellies that are where they harbor the explosive energy that they use to blow-up.[2]

If a Bomber was created to fulfill a specific objective, then it will present some characteristics that will differentiate it from the rest of the specimens. For example, this is the case of the specialized Bomber, which was designed to fight Captain Celebrity, which is bigger and has six arms.[3]

The Bombers lack any personality traits, and since they are created with the sole purpose of obeying and fulfilling the orders entrusted to them without questions, they do not seem to have the capacity to think for themselves. Also, because they are manufactured to being used in suicide attacks, they lack any instinct for self-preservation or fear.

Along with the other Next-Level Villains, the Bombers were mass-produced by the Villain Factory at the Onomura Pharma Corp., being developed in the Bomber Warehouse.[4]

The villain known as Number 6 had set himself with the current goal of taking down Captain Celebrity. To achieve this, he first decides to carry out a test attack near the Marukane Department Store, where the American hero usually is. After a Christmas party, the Sisters of Saint Lila's Academy get into a taxi, but the Bomber appears and takes the taxi, with the girls inside. Captain Celebrity goes out in pursuit, but just when he is going to reach them, Number 6, who had organized everything, explodes the creature with a device.

Thanks to his aerodynamic barrier of his Flight Quirk, Captain Celebrity manages to protect the girls, although when doing it he had lowered his own protection. With this action, Number 6 manages to deduce the weak point of Captain Celebrity's Quirk, and decides to leave to prepare a new attack to end his life, releasing more flying bombers.[5]

The villain decides to make that attack during Captain Celebrity's farewell party in the Tokyo Sky Egg, but when he was about to start the plan, the laboratories where the Bombers are created are assaulted by a Police Force lead by Detective Naomasa Tsukauchi, and with the help of the heroes Eraser Head and Fat Gum. Due to this situation, Number 6 is forced to explode almost all Bombers to escape and destroy the laboratories and all shreds of evidence. Despite this setback, he decides to continue with his plan to attack Captain Celebrity, heading the five Bombers that survived to the Tokyo Sky Egg.[6]

Once they arrive, one of the Bombers self-destructs to lure Captain Celebrity to the outside to face them. Then another Bomber also explodes to distract him and allow a particularly large Bomber to severely damage the Tokyo Sky Egg tower by self-destructing. To prevent the tower from falling, Captain Celebrity uses his enormous strength to hold the building, but this leaves him helpless.[7]

The remaining two Bombers continue with Number 6's plan. One settles on the roof of the Dome and generates a strong EMP blast, causing a blackout in the building and cutting the cell signals, preventing someone from calling the authorities for help.[8] Meanwhile, a six-armed Bomber, who also possesses a Regeneration Quirk, attacks with explosive punches to Captain Celebrity, constantly regrowing its limbs, while the hero can barely defend himself because he is holding the structure, Fortunately for him, the arrival of Koichi Haimawari first and several professional heroes later save his life,[9] and they manage to defeat the remaining Bombers.

However, one of the Bombers manages to break free, and following the guidelines of Number 6, it duplicates its body enough that went it self-destructs, it creates an explosion so powerful that the Tokyo Sky Egg begins to fall down, with thousands of people inside.[10] Fortunately, a call to All Might minutes before the explosion makes the number one hero come quickly and save everyone, avoiding a tragedy.[11]

Still, Number 6 does not give up. Using his device again, he has the remaining Bomber cells fuse together, using a combination of the regeneration and duplication to combine, grow, and release a swarm of Mini-Bombers to attack everyone in his last attempt to cause a tragedy, but all creatures are destroyed by All Might with his Nebraska Smash.

After this, Number 6 declares that all Bombers have been destroyed,[12] though the cells of the Bombers are later re-used to create the Anonymous.

Immense Strength: The first Bomber was capable of lifting a taxi into the air and flying while carrying it.[13]

Self-Detonation (爆発, Bakuhatsu?): All Bombers have the ability to self-destruct through a large explosion that is generated in their bellies. Number 6 activates this Quirk through a device. The six-armed Bomber can perform explosive punches.[19]

Flight (飛行, Hikō?): Every Bomber possess a pair of wings, allowing them to fly.[20]

Regeneration (再生, Saisei?): The specialized Bomber possessed a regeneration Quirk, allowing it to fire off explosive punches and then regenerate it's arms.[21]

Radio Waves (電磁波, Denjiha?): One of the Bombers has the ability to generate electromagnetic pulses.[22]

Propagation (増殖, Zōshoku?): The specialized Bomber possessed a Quirk that allowed it to grow extra bodies.[23] 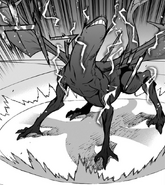 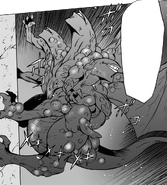 The Bombers are under the complete control of the Number 6 and will follow all of his orders without question. The villain does not hesitate to sacrifice their lives without remorse.